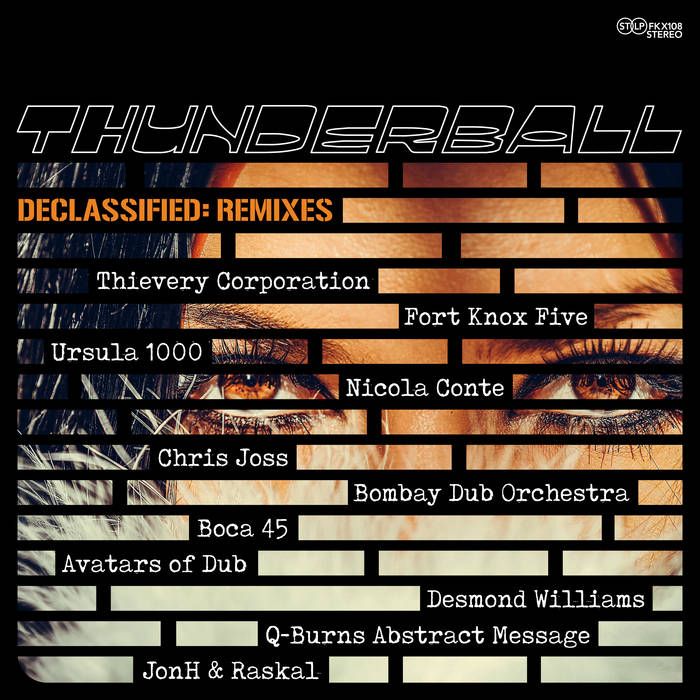 The recent discovery of a hidden trove of buried remixes offers a rare glimpse into the birth of the Downtempo genre and sheds new light on how to get the party started right! Last year saw Thunderball – the alter ego of Fort Knox Five’s Steve Raskin, Sid Barcelona and Rob Myers – come home to Fort Knox Recordings. While curating the re-release of their legendary catalog Thunderball uncovered a vault of previously-unavailable remixes dating from 1997 to 2007. These songs track the evolution of electronic music in Washington, DC as it was being blasted from the legendary Eighteenth Street Lounge and released on Thievery Corporation’s vaunted imprint: ESL Music.

As one of the first artists to sign to ESL Music, Thunderball are fortunate to have two remixes by the label bosses and Downtempo progenetors themselves! Thievery Corporation offer up two remixes – both produced in the fertile, late-’90s era. “On Pop The Trunk,” they deliver a mid-tempo masterpiece, complete with chanting vocals, ’70s horn samples and a percussion workout that grooves as hard today as it did the day it was popped into the trunk. Their remix of “Hijack” captures that elusive, old-school trip-hop flavor which defined the burgeoning lounge scene.

One of the first remixes Fort Knox Five ever produced was “Heart Of The Hustler.” They turn the drum'n'bass of the original into classic hip-hop soul, a combination that would become the foundation of the FK5 sound. In the progression from Thunderball to Fort Knox Five lies JonH & Raskal, the tech-breaks side project of Jon Horvath and Steve Raskin. On “Domino,” they showcase their breaks chops with huge builds, funky percussion and bass grooves to create an epic and unrelenting funky breaks monster. Fort Knox Five then deliver their own version of ragga breaks on a remix of “Strictly Rudeboy,” increasing the energy of the original on this electro-ska stomper, creating a bass-heavy dancefloor gem.

ESL Music was a hotbed of creativity that launched the careers of many musicians and producers, many of whom are featured in this collection. Italy's Nicola Conte reinterprets “Elevated States” with live musicians and jazz orchestration, and the result turns the track into vintage ’70s bossa-soul. France’s Chris Joss conjours an eclectic, afro-funk remix of “Thunder In The Jungle,” with live instrumentation that includes funky guitars, stomping drums and staccato claves. New York’s Ursula 1000 transforms the ’60s rave-up of “Get Up With The Get Down” into a moody, nu-disco banger with dark stabs and phat synths. Longtime ESL studio engineer and soundsmith Desmond Williams reworks “Heart Of The Hustler” into a dubbed out reggae-meets-soul remix, a staple of the early 2000's downtempo sound. Avatars of Dub – early inductees to the ESL Music roster – remix “This Girl” into a trippy, atmospheric drum'n'bass roller with echoes, delays and retro synths.

Bombay Dub Orchestra upped the ante on their remix of “The Road To Benares” by adding masterful flutes, tablas and strings to the sitar and stand-up bass of the original. “Stereo Tonic” was a big track for Thunderball and two great remixes are included here, the first by UK producer Boca 45 of Dynamo Productions. Boca 45 heaps on loads of dirty-vinyl samples and clips, creating a retro-breaks anthem. Taking the track into a deeper direction is Q-Burns Abstract Message who crafts a swinging, reggae-tinged dub-house groove for the dancefloor.

Not only have these tracks been meticulously culled and combed by Thunderball themsleves they have also been remastered to sound as good today as they were meant to sound when they were created. Declassified: Remixes ranges from dub and downtempo to house and breaks, drum'n'bass and global beats to nu disco… a breadth of genres and soundscapes that can only be: Thunderball.